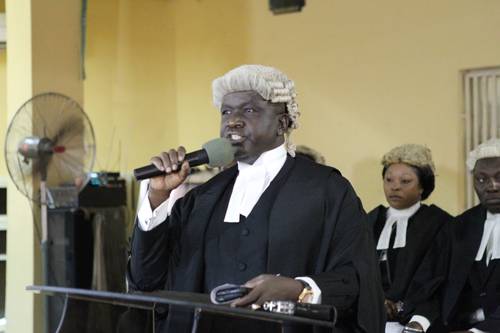 The revelation that Mr Rickey Tarka (SAN) paid a bribe to tune of N225, 000 in to the account of a Lagos Federal High Court Judge; Justice Mohammed Yunusa is quite an explosive exposition that gives credence to the position of our Coalition, the Coalition Against Corrupt Leaders (CACOL); that some lawyers and Judges abet and aid corruption.

According to news reports, the Economic and Financial Crimes Commission EFCC, in a counter-affidavit to the suit filed by Rickey Tarfa to challenge his alleged unlawful arrest and detention by the EFCC on February 5 for hiding two suspects of financial crimes in his Sport Utility Vehicle (SUV) and thereby willfully obstructing the arrest of the suspects. An operative of the EFCC stated in the affidavit that a check carried out into the Access Bank account of Tarfa’s Law firm revealed that a sum of N225, 000 was sent to Justice Mohammed Yunusa’s Bank account, a transaction the Judge acknowledged with appreciation through a text message which said ‘Thank you, my senior advocate’.

To highlight the relationship between Mr Tarfa and Justice Mohammed, the EFCC counter-affidavit further revealed that Rickey Tarfa’s lawyer firm has habitually been asking the Chief Registrar of the Lagos Judicial Division of the Federal High Court to assign his cases to Justice Mohammed Yunusa.

Mr Debo Adeniran, Executive Director, CACOL, when reacting to the revelations said, ”Nigerians need no further testimony to underscore the position of our organisation; that of the EFCC and the Presidency on the ignoble roles some members of the Bar and the Judiciary play in frustrating the war against corruption. The President said the Judiciary was the headache in the war against corruption while EFCC avers that some lawyers do not only aid and abet corruption but they tutor corruption criminals on how to escape justice.’’

‘’That 90 Senior Advocates of Nigeria (SAN) can queue behind a colleague with such disgusting baggage to appear in court is indeed very shameful; and it speaks volumes about the level of immorality and rot in the system. Even, the presiding Judge in the case described the appearance of the SANs as ‘’tantamount to harassment and intimidation’’, following the appearance of the SANs at the court.’’Mr Adeniran added

And as if to add insult to injury Rickey Tarfa has publicly admitted that he paid the N225, 000 in to the Judge’s account but that it was for some burial expenses of Justice Mohammed’s late father! Nigerians are not fools, assuming without conceding, that the story is true, what is the explanation for the frequent requests from Tarfa’s law firm for his cases to be assigned to Justice Mohammmed’s court? CACOL is determined to expose the lies of these abettors and perpetrators of corruption; shame all corrupt elements and together with forces that are ready to be unpretentious about the fight against corruption kill the corruption!

“We hasten to add that our position is not a blanket condemnation of the Bar and the Judiciary. In fact CACOL is calling on the Nigeria Judicial Council (NJC) and the Nigeria Bar Association (NBA) to make conscious, spirited and determined efforts to sanitize the Judiciary and the Bar with goal of enhancing the expedient and prompt treatment of corruption cases given the malaise the monster have wreaked on our National existence.’’ Mr Adeniran said.