The Coalition Against Corrupt Leader (CACOL) has condemned, in strong terms, the arrest of some election observers in Imo State last week. 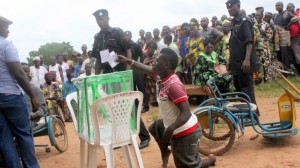 The civil society activists under the aegis of Justice and Equity Organisation (JEO), who were officially, accredited as observer in the Anambra Governorship elections of 16th November, 2013, by Independent National Electoral Commission (INEC) were rounded up in the premises of Disney Hotels, Km 4, Owerri-Onitsha road, Owerri, Imo State during a pre-election training and briefing session.

The Executive Chairman of CACOL, Comrade Debo Adeniran, described the arrest as an attempt to manipulate the election in favour of some political brigandage that has been holding the country down.

Adeniran to told www.africanexaminer.com that it is very unfortunate that the situation is happening at a time when the country is supposed to be more enlightened and sensitive to election issues, adding that it has become customary for the police to be used as tools against the electorates during election. “The handwriting was clear on the wall that the arrest was an attempt to cripple the civil society group from monitoring the Anambra election”, he emphasized.

He said, “How can the law enforcement agency paid from taxpayers’ money, allow itself to be used by the politicians against the people they swore to protect?  What was the rationale behind implicating a law abiding group that was going to Anambra State to monitor electoral process in the state? It is not only scandalous, but also libelous for any responsible government institution to incriminate innocent group of persons all in the name of politics.

“It is rather too sad to know that the arrested persons were duly accredited by INEC as observers in the Anambra election. This is a slap on our democracy and the violation of the fundamental rights of the suspects.”

Comrade Debo Adeniran, however demanded the immediate release of the activists and called on the Inspector-General of Police, Mr. Mohammed Abubakar, to step into the case.

He also said that there is urgent need for the IGP to step into the case in order to find out why the election observers were paraded like common criminals.

“We are calling for the immediate release of the activists. The IGP must also investigate the case to bring to book anyone, whether police officers or politicians, connected to this unjustifiable act because they are obviously enemies of our nascent democracy, and by extension Nigeria,” Adeniran stated.