The Coalition Against Corrupt Leaders (CACOL) has tasked the Senate on the need to allow for open mind during the screening exercise of the nominees for ministerial appointment by the President. 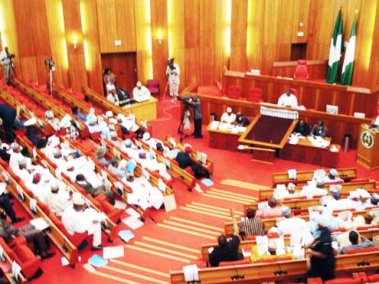 This call is coming against the background of discordant tunes emanating from across the ranks of members of the red chambers. The body language of some vocal senators since the submission of the list by the president, has so far given a lead to what is likely to witness a war of allegiance rather a supposed constitutional exercise aimed at ensuring that those given the mandate to administer the affairs of governance as ministers are eminently qualified to do so.

If the grapevine account is anything to go by, the senate, in the course of carrying out its duty in this regard, might turn out to be a ’house of commotion’ in which tent-pitching and premeditated vendetta, premised on political persuasion, take precedent over consideration for merit. This is why CACOL considers it expedient at this point in time, to remind members of the upper chambers that their allegiance as representatives of the Nigerian people should be first, to the people and the nation of Nigeria and therefore should take precedence over all other considerations.

“A focused, patriotic and objective legislature remains d key to any resourceful democracy and for our hard-fought democracy to be successful and to stand the test of time, a healthy synergy between the executive and the legislature cannot be substituted”, the group’s head, Debo Adeniran stressed.

Although CACOL has overtime remained in the forefront in demanding on behalf of the Nigerian masses that a thorough screening job be done by the law-making body, to ensure that people of character and integrity be assigned ministerial responsibilities, this however should not be done on the altar of score-settling and blinded antagonism – all in the name of politics. They should remember that the common interest of Nigerians is Nigeria.